Bettie Mae Page was an American model who gained a significant profile in the 1950s for her pin-up photos. Often referred to as the “Queen of Pinups”, her jet black hair, blue eyes, and trademark bangs have influenced artists for generations. Here are the top 10 best Bettie Page quotes – 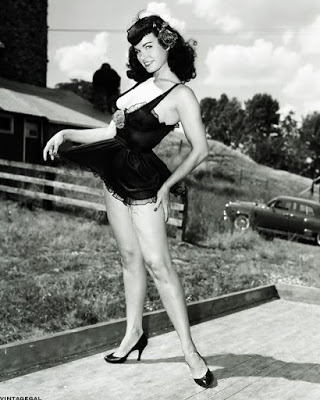 #1 It makes me feel wonderful that people still care for me… that I have so many fans among young people, who write to me and tell me I have been an inspiration.

#2 Sex is a part of love. You shouldn’t go around doing it unless you are in love.

#3 My favorite actress of all times is Bette Davis in Dark Victory. I have seen it six or seven times, and I still cry.

#4 I was never the girl next door.

#5 I love to swim in the nude and roam around the house in the nude. You’re just as free as a bird!

#6 I never kept up with the fashions. I believed in wearing what I thought looked good on me.

#7 For years I had my hair parted down the middle in a ponytail, tucked down around the sides… Well, I went and cut the bangs, and I’ve been wearing them ever since. They say it’s my trademark.

#8 Being in the nude isn’t a disgrace unless you’re being promiscuous about it. After all, when God created Adam and Eve, they were stark naked. And in the Garden of Eden, God was probably naked as a jaybird too!

#10 The only person I did bondage for was Irving Klaw and his sister Paula. Usually they would shoot four or five models every Saturday. He wouldn’t pay for the regular pictures unless we did some bondage. So I did bondage shots to get paid for the other photos.

So these were the top 10 best Bettie Page quotes. Do share them and keep reading!