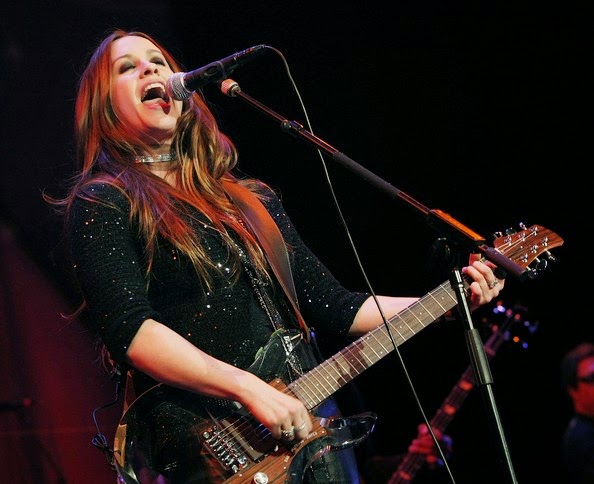 Alanis Morissette is a very popular rock singer, guitarist, song writer, actress and record producer. She is a Canadian-American singer who was born in Ottawa, Ontario, Canada on 1 June, 1974. Her music career began when she was a teenager. She recorded two pop albums Alanis and Now Is The Time under the banner of MCA records, Canada. Her first international album “Jagged Little Pill” wasreleased in 1995 and received allot of appreciation. “Jagged Little Pill” successfully sold more than 33 million copies. After that she released many other albums such as Under Rug Swept, Flavors of Entanglement, Havoc and Bright lights etc. In total she sold more than 60 million copies of her albums globally. She won 16 Juno awards and 7 Grammy Awards.

She was married to Mario Treadway in the year 2010 and now has one child. She lives at both places some times in America and at other times in Canada.

Here are some of the best Alanis Morissette quotes.

#1 I try to keep a low profile in general. Not with my art, but just as a person.

#2 When I’m off the road, my husband and I recharge our batteries. It’s a day of deep rest and connection with the spiritual, and that can be anything – going for a walk in nature, being in silence, burning incense.

#3 I highly recommend getting older! There’s less tendency to people-please.

#4 With songwriting I spend a lot of time living life, accruing all these experiences, journaling, and then by the time I get to the studio I’m teeming with the drive to write.

#5 I still indulge in a glass of wine or chocolate – treats are mandatory. Without deviating from the day-to-day healthy diet once in a while, it wouldn’t be sustainable for me, and that’s what I wanted: an approach to eating to last my entire life.

#6 Unless I really loved it and felt really passionate about it, I would just kind of abort the song and start a new one.

#7 What’s that line from TS Eliot? To arrive at the place where you started, but to know it for the first time. I’m able to write about a breakup from a different place. Same brokenness. Same rock-bottom. But a little more informed, now I’m older. Thank God for growing up.

#8 There were a lot of people who were a little afraid of the rage or blaming stance I was taking, and find what I am doing now more refreshing.

#9 It’s a joke to think that anyone is one thing. We’re all such complex creatures. But if I’m going to be a poster child for anything, anger’s a gorgeous emotion. It gets a bad rap, but it can make great changes happen.

#10 The whole celebrity thing is not something I’m overly interested in. I don’t pop up at parties. It’s just not my thing.

#11 When I was younger, I was terrified to express anger because it would often kick-start a horrible reaction in the men in my life. So I bit my tongue. I was left to painstakingly deal with the aftermath of my avoidance later in life, in therapy or through the lyrics of my songs.

#12 There’s cleanliness to how I eat now. I’m much more in tune with my body, so now that I’m so in tune based on having become a semivegan, I can tell what foods affect energy levels. I can tell when I’ve been eating particularly high nutrient foods or I can tell when my glycemic levels are all over the place.

#13 Infidelity is a deal breaker for me. I’ve broken up with people over it. You can’t do monogamy 90 percent of the time.

#14 Alpha men are very turned on by the alpha woman, really high chemistry, really fun to work with, probably really fun to have affairs with, but there’s not sustainable harmony in that lack of complement. There can only be one person in the driver’s seat.

#15 We’re taught to be ashamed of confusion, anger, fear and sadness, and to me they’re of equal value to happiness, excitement and inspiration.

#16 Peace of mind for five minutes, that’s what I crave.

#17 Then I realized that secrecy is actually to the detriment of my own peace of mind and self, and that I could still sustain my belief in privacy and be authentic and transparent at the same time. It was a pretty revelatory moment, and there’s been a liberating force that’s come from it.

#18 The more vulnerable and the more confused the song is, the equal and opposite effect is how I feel after having written it.

#19 My three addictions of choice are food, love and work.

#20 My message to anyone who’s afraid that they can’t write music when they’re happy is ‘Just trust the passion.’ The passion can write a lot of things.

#21 My parents offered me the idea of ceilinglessness. There was no limit in terms of what was possible; no messages sent to me to say that I couldn’t do anything.

#23 I just feel compelled to continue to be transparent. It just really levels the playing field and eradicates the shame that I have, or that one might have, about being human. So I’m going to just keep going.

#24 My brother says that I was writing songs about fate while he was off playing soccer. Now I tell him he’s 33 and being a professional while I’m playing soccer with my friends. Ha!

#25 I think it’s irresponsible when celebrities imply they’re doing it all themselves. My son has aunties and uncles around all the time, and my husband is my hero. He’s really full-on. I couldn’t do it any other way.

#26 I was always such a people-watcher. I would sit on street corners alone and watch people and make up stories about them in my head. Then, all of a sudden, I was the one being watched.

So these were some of the best Alanis Morissette quotes. Do read and share them. Also, do comment what you have in your mind after reading these thoughtful quotes.