Here are the some best autumn quotes that will speak what autumn makes you feel. The reverence and exuberance autumn fills us with can be clearly understood by these quotes. As these writers have also felt the same. 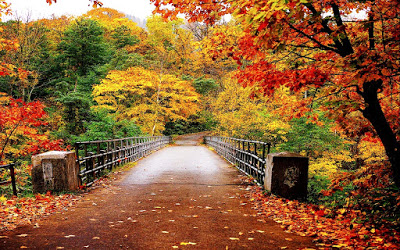 Autumn is as joyful and sweet as an untimely end.

I was just telling Claire about a guy I met in bread class. I hate him, but he could be my soul mate.

There is something incredibly nostalgic and significant about the annual cascade of autumn leaves.

I’m so glad I live in a world where there are Octobers.

October, baptize me with leaves! Swaddle me in corduroy and nurse me with split pea soup. October, tuck tiny candy bars in my pockets and carve my smile into a thousand pumpkins. O autumn! O teakettle! O grace!

You expected to be sad in the fall. Part of you died each year when the leaves fell from the trees and their branches were bare against the wind and the cold, wintery light. But you knew there would always be the spring, as you knew the river would flow again after it was frozen. When the cold rains kept on and killed the spring, it was as though a young person died for no reason.

A tree with red leaves is like an old man with gray hair. Likewise, my love for you was blue, but now it’s orange, and that’s a compliment.

-Jarod Kintz, This Book is Not FOR SALE

The Waverley sisters hadn’t been close as children, but they were as thick as thieves now, the way adult siblings often are, the moment they realize that family is actually a choice.

That country where it is always turning late in the year. That country where the hills are fog and the rivers are mist; where noons go quickly, dusks and twilights linger, and midnights stay. That country composed in the main of cellars, sub-cellars, coal-bins, closets, attics, and pantries faced away from the sun. That country whose people are autumn people, thinking only autumn thoughts. Whose people passing at night on the empty walks sound like rain.

Fall has always been my favorite season. The time when everything bursts with its last beauty, as if nature had been saving up all year for the grand finale.

Her pleasure in the walk must arise from the exercise and the day, from the view of the last smiles of the year upon the tawny leaves and withered hedges, and from repeating to herself some few of the thousand poetical descriptions extant of autumn–that season of peculiar and inexhaustible influence on the mind of taste and tenderness–that season which has drawn from every poet worthy of being read some attempt at description, or some lines of feeling.

Listen! The wind is rising, and the air is wild with leaves,

We have had our summer evenings, now for October eves!

Why is summer mist romantic and autumn mist just sad?

-Dodie Smith, I Capture the Castle

Autumn seemed to arrive suddenly that year. The morning of the first September was crisp and golden as an apple.

At no other time (than autumn) does the earth let itself be inhaled in one smell, the ripe earth; in a smell that is in no way inferior to the smell of the sea, bitter where it borders on taste, and more honeysweet where you feel it touching the first sounds. Containing depth within itself, darkness, something of the grave almost.

No spring nor summer beauty hath such grace as I have seen in one autumnal face.